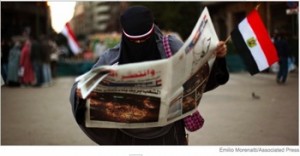 In this week’s issue of Five Cool Things, we touchdown in #Egypt – site of one of the most moving and transformational events in recent history. What is so endlessly fascinating is the warp speed at which a truly momentous story unfolded – just 18 days! The means employed by the storytellers – digital photography, traditional and social media – to both share this incredible story with the world, and to effect change, is profound. Whether you Tweet or not, whether you do Facebook or not, whether you understand social media or not (and it could be fairly argued that 21st centruy literacy requires that you ought to) social media tools are here forever and have demonstrated their capacity to change the world. How big a deal is that? It’s stunning on every level. To add a touch of levity to this week’s issue, we visit one man’s communication breakdown. The struggle to write is the touching tale in a documentary called Bad Writing. Read this issue on the FCT blog. Onward!

If you were not moved, you’ve got a patch of black ice where your heart is supposed to be. Over the past 18 or so days, the world has watched transfixed, as events unfolded in Tahrir Square in Cairo. Hundreds of thousands of people in Egypt and around the world, took to Facebook, Twitter, Tumblr, blogs and Instagram, to communicate emotions, to provide instructions for gathering places, to frame the story. Minute by minute, tweet by tweet, an avalanche began and the forces set in motion could not be stopped. Based on hashtag analysis, over 1, 300,000 Egypt related tweets were posted between Jan. 24 – Jan. 30. 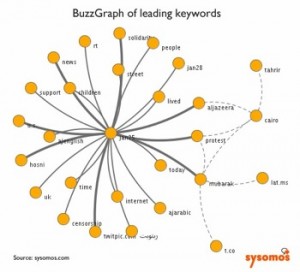 Keywords to the revolution

If you find yourself wishing for the perspective that the outside world can bring to historic events, thank YouTube, who provides at least one easy way to gain a foothold on a different view of things. The Aljazeera English Channel on YouTube is (sometimes) riveting but more important, gives you a whole new slant on the news. YouTube allows (most) anyone to set up their own channel and to broadcast (within limits) topics of interest. Visit Aljazeera’s English Channel here>> 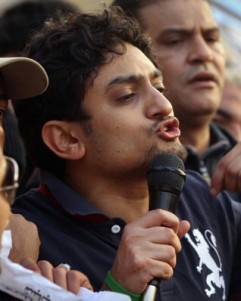 His name is Wael Ghonim and isn’t it some form of poetic justice that a Google executive, a marketing manager no less, helped sparked what he has called revolution 2.0? Ghonim created a Facebook page to help commemorate an Egyptian who died in the early days of the January 25th, uprising. He says, unequivocally, This could not have happened without social media. It was that Facebook page, We are all Khaled Said, that helped continue to spark the uprising that has changed Egypt forever and also landed Wael in jail for 12 days. Group of fascinating interviews here>>. Brief article here>>

4. The Revolution Will be Digitized | Photos from Egypt 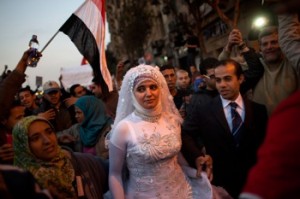 An Egyptian married couple are surrounded by anti-Mubarak protesters at Tahrir Square in Cairo, Egypt, Tuesday, Feb. 8, 2011. Protesters appear to have settled in for a long standoff, turning Tahrir Square into a makeshift village with tens of thousands coming every day, with some sleeping in tents made of blankets and plastic sheeting. (AP Photo/Emilio Morenatti) 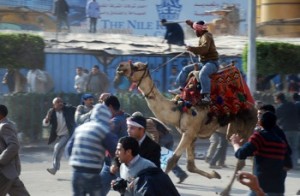 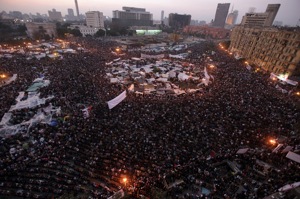 From the filmmakers: Bad Writing is a documentary about a wannabe poet who sets off on a quest for answers about writing – bad writing, good writing, and the process in between. What he learns from some leading figures in the literary world will inspire anyone who has ever dreamt of creating art. Click on the image above to watch a trailer.