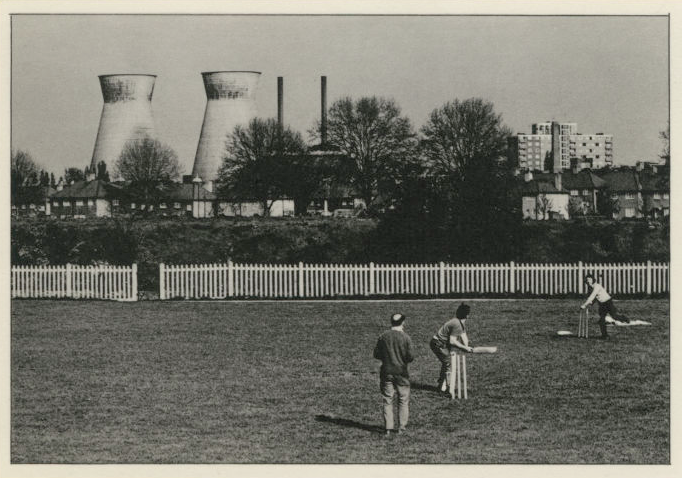 Zadie Smith crushes it with her mind vise in this brilliant take on an ad for beer. Find Your Beach is a thirst quenching ride — how advertising works on you, why New York is corrupted, but still easier (for her) to work in than England, and how fiction is, “a reality shaped by your own desires.”

Across the way from our apartment—on Houston, I guess—there’s a new wall ad. The site is forty feet high, twenty feet wide. It changes once or twice a year. Whatever’s on that wall is my view: I look at it more than the sky or the new World Trade Center, more than the water towers, the passing cabs. It has a subliminal effect. Last semester it was a spot for high-end vodka, and while I wrangled children into their snowsuits, chock-full of domestic resentment, I’d find myself dreaming of cold martinis.

Before that came an ad so high-end I couldn’t tell what it was for. There was no text—or none that I could see—and the visual was of a yellow firebird set upon a background of hellish red. It seemed a gnomic message, deliberately placed to drive a sleepless woman mad. Once, staring at it with a newborn in my arms, I saw another mother, in the tower opposite, holding her baby. It was 4 AM. We stood there at our respective windows, separated by a hundred feet of expensive New York air.

The tower I live in is university accommodation; so is the tower opposite. The idea occurred that it was quite likely that the woman at the window also wrote books for a living, and, like me, was not writing anything right now. Maybe she was considering antidepressants. Maybe she was already on them. It was hard to tell. Certainly she had no way of viewing the ad in question, not without opening her window, jumping, and turning as she fell. I was her view. I was the ad for what she already had.

But that was all some time ago. Now the ad says: Find your beach. The bottle of beer—it’s an ad for beer—is very yellow and the background luxury-holiday-blue. It seems to me uniquely well placed, like a piece of commissioned public art in perfect sympathy with its urban site. The tone is pure Manhattan. Echoes can be found in the personal growth section of the bookstore (“Find your happy”), and in exercise classes (“Find your soul”), and in the therapist’s office (“Find your self”). I find it significant that there exists a more expansive, national version of this ad that runs in magazines, and on television.  Read on here >> 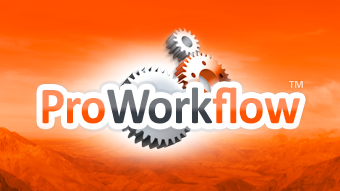 A couple of weeks ago, I stumbled onto an amazing web based project management tool for…projects, quotes, time, invoices and tasks. I can’t say that name does much for me, but it looks like it can do pretty much everything in one place. Which is new, at least for me. I signed up and shortly thereafter, I got an email and a phone call from my personal guide at ProWorkflow who’s going to help me negotiate the wee bit daunting learning curve. Offered for all you creatives out there (with apologies to John Simmons, who so does love that word.) Visit ProWorkflow here >> 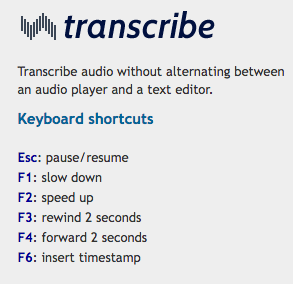 I am so happy for this. Even happier than I was when found that work flow thingy above. If you have to transcribe interviews — and it is known that some of you do — you know what an epic pain it can be. Not that you’ve complained about it. But this  privilege just got a lot easier. Thanks to 5CT reader and pal AG in Prague. Go take a look >> 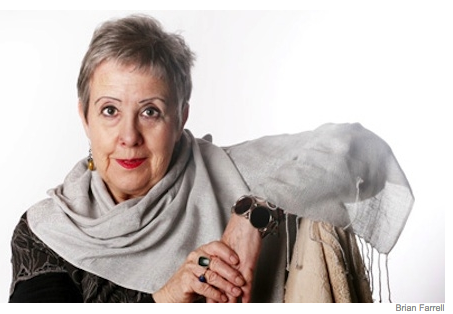 A while back I was invited to blog for a friend of mine — an Arsenal fan who lives in London. I wrote this piece below and received from him a very polite form rejection letter. “While we really enjoyed this fine piece, we had to conclude it just isn’t for us,” the letter said. “We wish you the best in placing it and hope you will continue to read our blog.” Quick as a cat I dashed off another blog post, which was, to my great relief accepted. Here’s a map and the piece below… 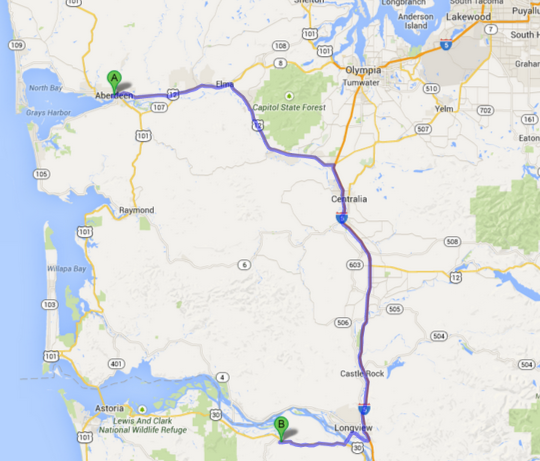 I live in the Pacific Northwest. “The corner of the country,” said one fine writer, “to which the nuts roll.” But the gray skies and the rain, and the hard up logging towns have given us more than nuts. The explorers Lewis and Clark made it to the edge of the continent. An epic winter delivered them to the edge of their own sanity. This place can do that. But ever since they led the way, our lush, rain soaked towns and cities have sprouted artists and writers and musicians like mushrooms. Roll with me through one of the bleakest places anywhere — Aberdeen, Washington, population 16,000. Aberdeen gave us not one, but two singular American artists. Kurt Cobain and, the legendary photographer Lee Friedlander. Little Aberdeen, WA punches above its weight.

From Aberdeen, drive south on US Route 12 to Clatskanie, Oregon, population 1600, give or take. What we talk about when we talk about Clatskanie is short story writer and poet, Raymond Carver. Who lived and breathed these all too human stories and wrote them. The boozy kitchens, sad bedrooms, the love gone to seed — the Northwest clings to his pages like a rain without end.

Up in Port Angeles, Washington is the birthplace of writer and Carver muse, Tess Gallagher. Tess Gallagher authored many books of poems, including Willingly, about Carver’s influence on her own work. Here’s one.

Sudden Journey
Maybe I’m seven in the open field–
the straw-grass so high
only the top of my head makes a curve
of brown in the yellow. Rain then.
First a little. A few drops on my
wrist, the right wrist. More rain.
My shoulders, my chin. Until I’m looking up
to let my eyes take the bliss.
I open my face. Let the teeth show. I
pull my shirt down past the collar-bones.
I’m still a boy under my breast spots.
I can drink anywhere. The rain. My
skin shattering. Up suddenly, needing
to gulp, turning with my tongue, my arms out
running, running in the hard, cold plentitude
of all those who reach earth by falling.

From Port Angeles south to Oregon. And to the bass player and singer Esperanza Spalding, born and bred in Portland, Oregon. So many more I’d love to tell you about, past and present. There’s photographer Edward Curtis, who for 30 years romanticized North American Indians and died broke in Los Angeles. From Seattle, Timothy Egan writes about the West and rails about dunderheaded Republicans in the New York Times. I loved his brilliant The Worst Hard Time about the Dust Bowl.

Newly minted Seattle person, the writer Maria Semple, is the funniest person I’ve seen in ages. On stage with Dave Eggers, she toyed with him like he was a tiny field mouse, and she was a starving alley cat from the barrios of LA.

How could I possibly have resisted this?

In the early nineteen-seventies, a small group of photographers—including Martin Parr, Gerry Badger, Sirkka-Liisa Konttinen, and Stephen Weiss—set out to document what they understood to be real British life. Calling themselves the Co-Optic Group, the photographers created a series of postcards that are now on view as part of an exhibition of the Co-Optic archive at the Brighton Photo Biennial. More pics and the full story at The New Yorker >> 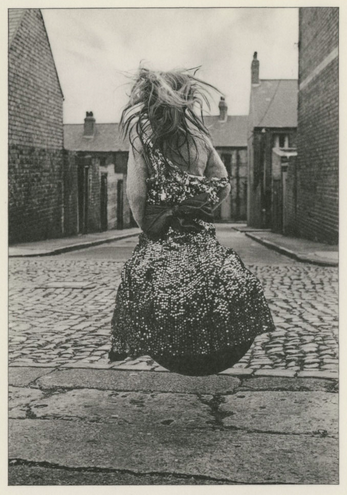 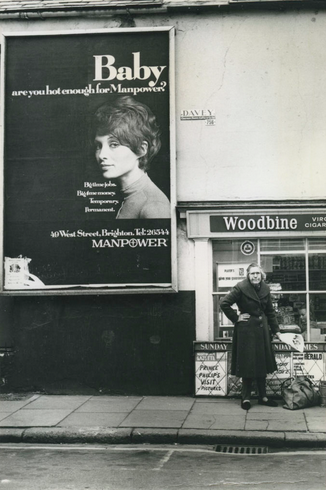