by 3 Apps, Art, Film, Jazz, Publishing, Writing Permalink
O ne fine writer says a pen might change the world. The Guardian celebrates the birthday of a fine jazz label.  An English filmmaker films an America that’s a little off — and a little other. In tech, there is a nice clean way to write on your iPhone or Mac and sync your work to everywhere. And still another publisher is kicking out stories in a gorgeous mode. Happy 2015, I wish you wisdom and prosperity. “Do not read,” said Gustave Flaubert, “as children do, to amuse yourself, or like the ambitious, for the purpose of instruction. No, read in order to live.” Make sure to scroll down to the end. A small treat awaits.

1.
Readers, get your biro’s out 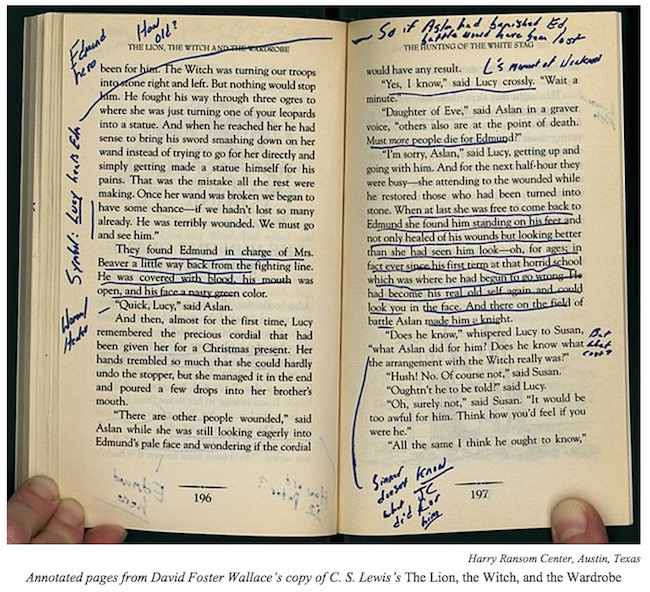 It seems sacrilegious, no? No, says Tim Parks, the English writer who blogs on a regular basis at the NY Review of books, and who always enthralls. Get the pen out, he says. When our powers of concentration are in mortal peril, like now, this seems a brilliant stroke. The upside to the pen he says, is to improve the lot of mankind and to crack the code, to boldly go where the writer has gone and expose their shenanigans. Check this out from his piece, Weapons for Readers,

We have too much respect for the printed word, too little awareness of the power words hold over us. We allow worlds to be conjured up for us with very little concern for the implications. We overlook glaring incongruities. We are suckers for alliteration, assonance, and rhythm. We rejoice over stories, whether fiction or “documentary,” whose outcomes are flagrantly manipulative, self-serving, or both. Usually both. If a piece of writing manifests the stigmata of literature—symbols, metaphors, unreliable narrators, multiple points of view, structural ambiguities—we afford it unlimited credit. With occasional exceptions, the only “criticism” brought to such writing is the kind that seeks to elaborate its brilliance, its cleverness, its creativity. What surprised me most when I first began publishing fiction myself was how much at every level a novelist can get away with.

Ed. note: It’s been reported that the recently deceased Mario Cuomo had an impressive personal library with dozens of his books heavily annotated.

The world’s most famous jazz label – celebrated for its striking use of design as much as for its groundbreaking recordings – is 75 this year. John Fordham tells the story of Blue Note through a selection of its famous album covers. – The Guardian

Founded by two German immigrants escaping the Nazis, Blue Note Records turned 75 in 2014. I’m not enough of an audiophile to truly lament the loss of vinyl and the sonic truths that were lost in the great digital swap out. But we have lost something very real in terms of album cover visual art. Having Blue Note’s big art and music in your home was like traveling The Left Bank with your own little black beret and pack of Gitanes even though you were really on Union Street wearing flannel shirts. Courtesy of The Guardian, here’s a mini tour of Blue Note’s terrific cover art. Happy 75th Blue Note. As a side note, enjoy the most succinct press release of all time that announced it all. 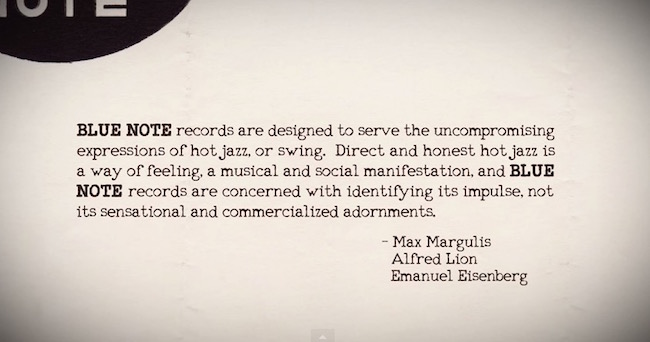 Imagine a world where every press release is only 46 words.

3.
There’s this other place called America

To travel across this country can be awe inspiring. Unsettling too. It’s grim in a lot of places. But even in the forgotten places, or the too easily forgotten places, there are powerful stories of people pushing hard against the headwinds.

James Coulson, (yet another Brit doing fine creative work) has set out to make a series of short films of The Other America. These are places that are truly and imaginatively in between.

These short films are quite beautiful >>

4.
Write and sync easily on your mac, phone or tablet 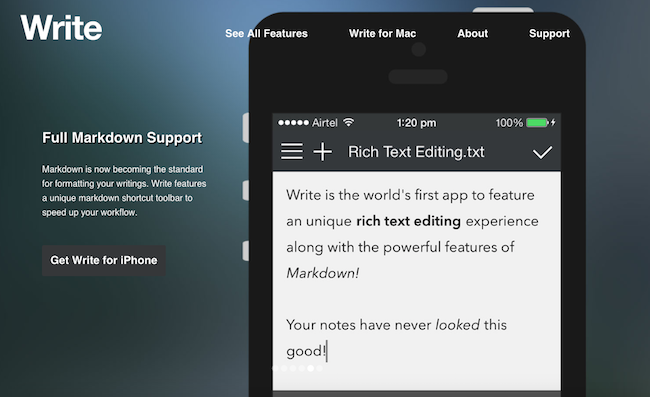 Here comes a sweet little app for distraction-free writing. It’s called Write. Technically, this is a ‘Markdown writing app’ which means it’s mainly for HTML. But these apps (Byword is another one) can be fantastically beautiful to write in, especially since Word is not exactly beautiful to write in. It works on your laptop, tablet or iPhone, it will sync with iCloud and Dropbox. There is a running word count, which I love because of this.

Want to export your note or publish it as a web page? No problem, Write has got you covered. With full MultiMarkdown 4 support, you can export properly formatted HTML with tables, references and images.

How I love Five Dials. The fonts, the stories, the design, the writers…Published by Hamish Hamilton publishers, (home to Sartre, Camus, Truman Capote and Lydia Davis’ Can’t, Won’t) this quirky, gorgeous, publication makes me want to redesign everything in sight. Wondering if my English pals know about this. I’m not familiar with most names I see there, except for Nick Hornby who shows up in a Q & A. Here’s a taste of how Five Dials does its thing. 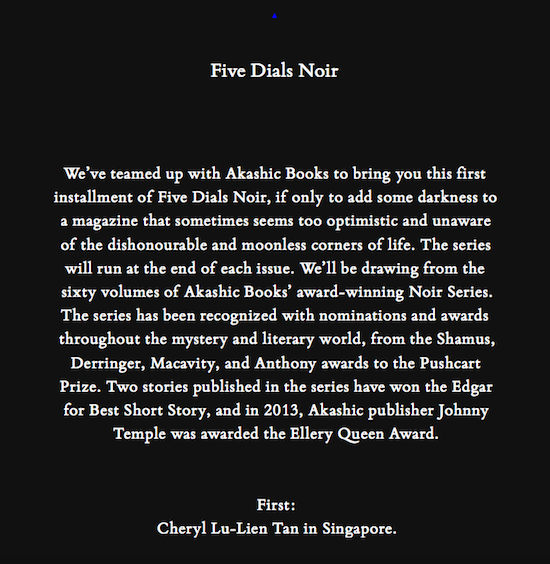 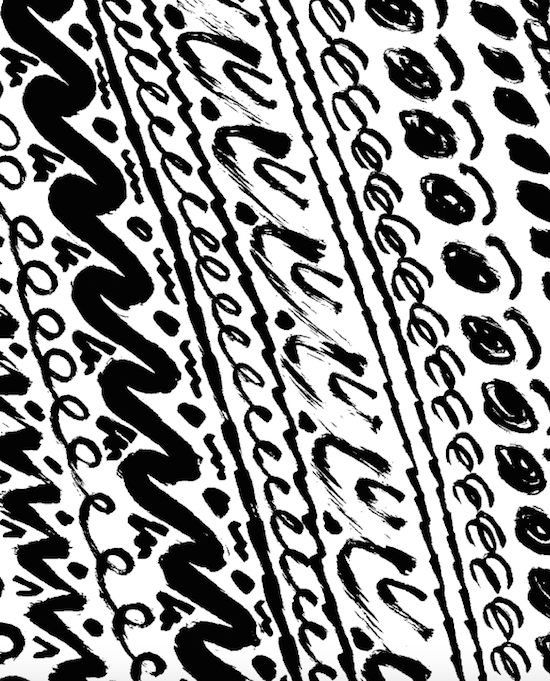 Five Dials and its great use of b/w graphics…

What seems beautiful to me, what
I should like to write, is a book about
nothing, a book dependent on nothing
external, which would be held together
by the strength of its style, just as the
earth, suspended in the void, depends on
nothing external for its support; a book
which would have almost no subject, or at
least in which the subject would be almost
invisible, if such a thing is possible. The
finest works are those that contain the
least matter; the closer expression comes
to thought, the closer language comes to
coinciding and merging with it, the finer
the result. I believe that the future of Art
lies in this direction. – The Selected Letters of
Gustave Flaubert, 1954 (Five Dials No. 1) 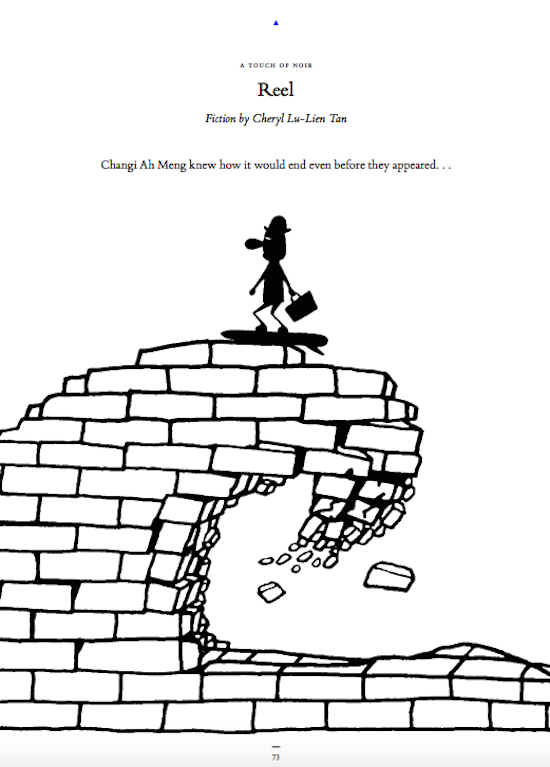 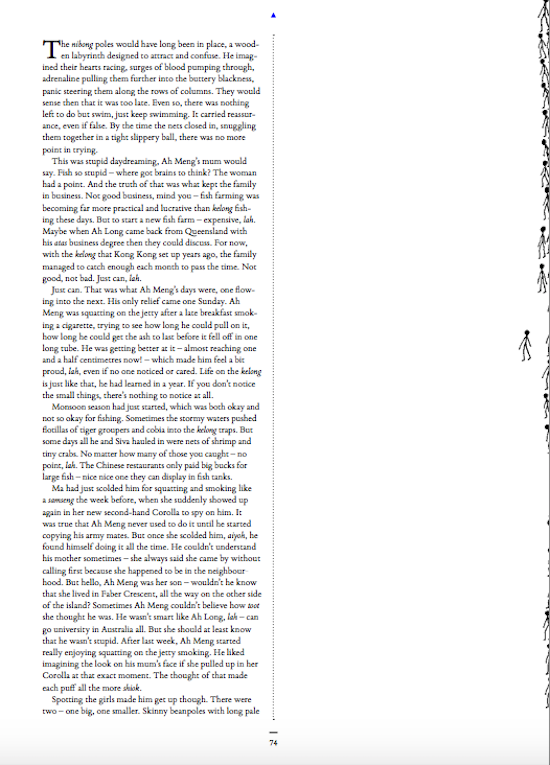 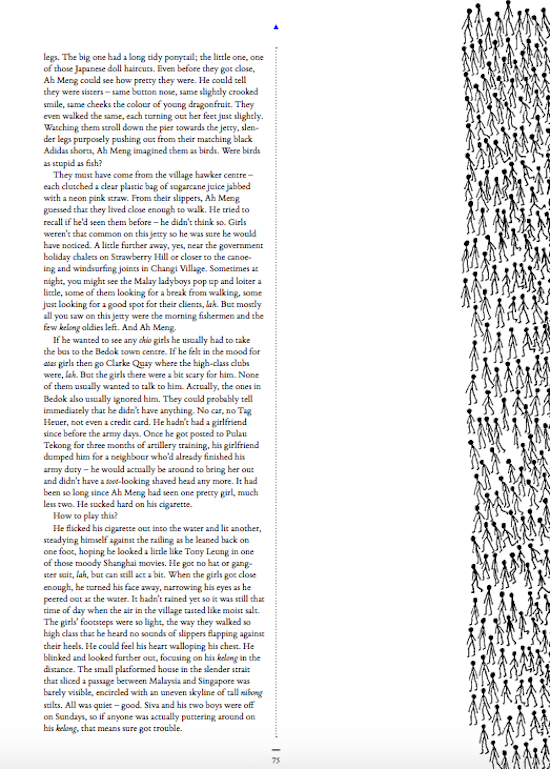 Love this so much… 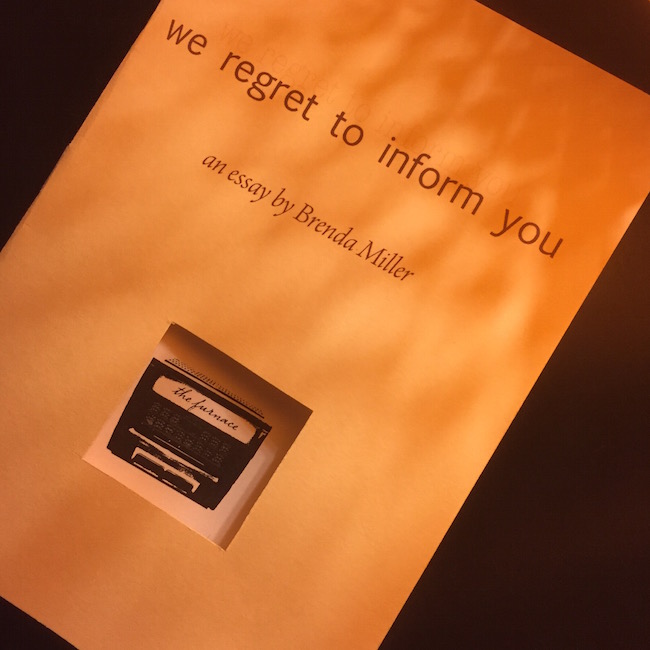 You never know where the next piece of fine writing is going to come from. Might not be the big novel. Might show up in the form of a chapbook meant to be read while listening to an audio performance of same, that you find while poking around Elliott Bay Books, two blocks from your house. This is from Brenda Miller’s fine suite of letters themed around the we regret to inform you trope.

Thank you for your application to get married. While I saw much to admire here, I regret to inform you that you do not meet my needs at this time.
I do want to commend you for your efforts over the past five years. You did your best, but your anxiety made it difficult to proceed on a clear path. Even so, we did love our coffee in the mornings, the meals in the evening, the travels through the Middle East (let’s just forget the argument we had while walking the walls on the old city of Jerusalem. Water under the bridge…). You laughed at my jokes, thanks for that. And of course, being fledgling writers together, in the salad days of artistic expression, before the marketplace intervened.
Try to remember that we loved the way we could: not perfectly, not entirely well, but genuinely—one injury against another’s. I loved your lisp. And the little mole above your lip. I touched your scars, and you touched mine. We tried. But at some point, a relationship shouldn’t have to try so hard, right?
It may just be a timing thing. Best wishes in your future matrimonial endeavors; I’m sure your talents will be put to good use elsewhere. I hope we remain friends.

The Sun Magazine has more from we regret to inform you >>

Equally interesting is the story behind this publication — The Furnace. Look….