We hear a lot about the power of words and of stories. Those instances when the yeast works its magic are rare and beautiful to behold. Kate Tempest is a performance poet from London, and her stunning 2015 Europe is Lost seems a mite prescient. I found myself floored at the writing in The Crack-Up, F. Scott Fitzgerald’s series of ‘confessional’ essays for Esquire. Martin Pistorius made me weep and Max Porter filled me with joy and wonder and a touch of envy. The rich, driving sounds of Kendrick Lamar’s Complexion (A Zulu love) come via DM. Seems a good time for this: “Political language is designed to make lies sound truthful and murder respectable, and to give an appearance of solidity to pure wind.” George Orwell


What else but this for right now?

2.
F. Scott Fitzgerald’s The Crack-Up, is the first great memoir


Fascinating listen. David Brancaccio and writer Nick Flynn, explore Fitzgerald’s landmark essays from the mid 1930s. Very much worth a listen. From the first essay, February 1936:

“One should, for example, be able to see that things are hopeless and yet be determined to make them otherwise. This philosophy fitted on to my early adult life, when I saw the improbable, the implausible, often the “impossible,” come true. Life was something you dominated if you were any good. Life yielded easily to intelligence and effort, or to what proportion could be mustered of both. It seemed a romantic business to be a successful literary man — you were not ever going to be as famous as a movie star but what note you had was probably longer-lived; you were never going to have the power of a man of strong political or religious convictions but you were certainly more independent. Of course within the practice of your trade you were forever unsatisfied — but I, for one, would not have chosen any other.”

“And a smile — ah, I would get me a smile. I’m still working on that smile. It is to combine the best qualities of a hotel manager, an experienced old social weasel, a headmaster on visitors’ day, a colored elevator man, a pansy pulling a profile, a producer getting stuff at half its market value, a trained nurse coming on a new job, a body-vender in her first rotogravure, a hopeful extra swept near the camera, a ballet dancer with an infected toe, and of course the great beam of loving kindness common to all those from Washington to Beverly Hills who must exist by virtue of the contorted pan.”

Go to Esquire and read more >>

3.
Martin Pistorius, is the greatest comeback story ever

“True communication increases understanding and creates a more caring and compassionate world. Once, I was perceived to be an inanimate object, a mindless phantom of a boy in a wheelchair. Today, I am so much more. A husband, a son, a friend, a brother, a business owner, a first-class honors graduate, a keen amateur photographer. It is my ability to communicate that has given me all this.

We are told that actions speak louder than words. But I wonder, do they? Our words, however we communicate them, are just as powerful. Whether we speak the words with our own voices, type them with our eyes, or communicate them non-verbally to someone who speaks them for us, words are among our most powerful tools.”

4.
Grief is the Thing with Feathers, is simply beautiful 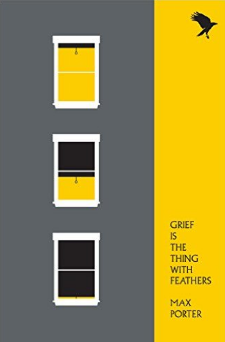 So I was talking to Max Porter last night. He was telling me that it was probably unlikely that his very slender book would have found a publisher if he himself weren’t in publishing. “Some people told me it needed an extra 40,000 words and others told me it was the start of something, but not complete.” This reading, held at Elliott Bay Books, was intimate and charming. Bloody perfect.

Titled after an Emily Dickinson poem, Porter’s gorgeous prose poem takes some inspiration from a Ted Hughes poem, Crow, that appeared after the death of Sylvia Plath. It breaks the mold, heads off in a direction altogether different from a standard novel. Which is a good thing. Might not be for everybody, but still, beautiful. Thank you, Elen Lewis.

Dark as the midnight hour or bright as the mornin’ sun
Give a fuck about your complexion, I know what the Germans done
Sneak (dissin’)
Sneak me through the back window, I’m a good field nigga
I made a flower for you outta cotton just to chill with you
You know I’d go the distance, you know I’m ten toes down
Even if master listenin’, cover your ears, he ’bout to mention

Dark as the midnight hour, I’m bright as the mornin’ Sun
Brown skinned, but your blue eyes tell me your mama can’t run
Sneak (dissin’)
Sneak me through the back window, I’m a good field nigga
I made a flower for you outta cotton just to chill with you
You know I’d go the distance, you know I’m ten toes down
Even if master’s listenin’, I got the world’s attention
So I’mma say somethin’ that’s vital and critical for survival
Of mankind, if he lyin’, color should never rival
Beauty is what you make it, I used to be so mistaken
By different shades of faces
Then wit told me, “You’re womanless, women love the creation”
It all came from God then you was my confirmation
I came to where you reside
And looked around to see more sights for sore eyes
Let the Willie Lynch theory reverse a million times with

Let me talk my Stu Scott, ‘scuse me on my 2pac
Keep your head up, when did you stop? Love and die
Color of your skin, color of your eyes
That’s the real blues, baby, like you met Jay’s baby
You blew me away, you think more beauty in blue green and grey
All my Solomon up north, 12 years a slave
12 years of age, thinkin’ my shade too dark
I love myself, I no longer need Cupid
And forcin’ my dark side like a young George Lucas
Light don’t mean you smart, bein’ dark don’t make you stupid
And frame of mind for them bustas, ain’t talkin’ “Woohah!”
Need a paradox for the pair of dots they tutored
Like two ties, L-L, you lose two times
If you don’t see you beautiful in your complexion
It ain’t complex to put it in context
Find the air beneath the kite, that’s the context
Yeah, baby, I’m conscious, ain’t no contest
If you like it, I love it, all your earth tones been blessed
Ain’t no stress, jigga boos wanna be
I ain’t talkin’ Jay, I ain’t talkin’ Bey
I’m talkin’ days we got school watchin’ movie screens
And spike yourself esteem
The new James Bond gon’ be black as me
Black as brown, hazelnut, cinnamon, black tea
And it’s all beautiful to me
Call your brothers magnificent, call all the sisters queens
We all on the same team, blues and pirus, no colors ain’t a thing

Barefoot babies with no cares
Teenage gun toters that don’t play fair, should I get out the car?
I don’t see Compton, I see something much worse
The land of the landmines, the hell that’s on earth